IDFA in iOS 14. The market leaders about the new reality

This June, Apple announced essential news about the deprecation of the IDFA in iOS 14. Since then, there are many thoughts on how to survive without The Identifier for Advertisers, what is SKAdNetwork, how will ad platforms such as Google Ads and Facebook Ads target the right users and train their algorithms. What is especially important is what will the attribution platforms like AppsFlyer, Adjust, Branch, etc. do with that. While things are up in the air, I have collected some useful articles and guidelines from the market leaders to understand better what awaits us after the ios 14 release date (14 – 18 September 2020)

IDFA or the ID (identifier) For Advertisers is a unique random number adopted by Apple to allow it to track users by advertising networks. The IDFA reveals the user’s personal information but in return helps advertising tools to target ads to the right user, measure marketing results, and attribute installs to marketing campaigns. The IDFA can be used to analyze user behavior with the help of in-app events in product analytics like Amplitude, Mixpanel, etc.

Why is it important?

Paid acquisition channels are fundamental for mobile app publishers from game development to social networks, e-commerce, or lifestyle apps. The market needs to have stable marketing channels to acquire new users on a daily basis. That’s why Apple launched Apple Search Ads, Facebook stocks are growing year by year, and even TikTok launched their advertisement self-service platform this year.

Eight years ago, since 2012, when iOS 6 was released, we used to live in a world where we could target users and optimize marketing campaigns using mostly IDFA to match clicks, installs, in-app, and user events. Apple App Store’s growth is enormous – the number of apps skyrocketed from 450 000 in 2012 to 4.67 million in 2019.  The 5000 apps that were in the market in 2008 are worth nothing nowadays.

It looks like the mobile app ecosystem is already settled down, and any changes may significantly destroy it. Qonversion is integrated with dozens of 3rd party tools that use IDFA, so we are closely monitoring the situation and keeping our finger on the pulse.

SKAdNetwork and AppTrackingTransparency – what is that?

AppTrackingTransparency is a framework by calling the requestTrackingAuthorization(completionHandler:) to manage access to the IDFA. This method shows a dialog with a request to allow/deny tracking once the app is installed once per app install. The only thing developers can customize is NSUserTrackingUsageDescription to replace the text requesting permission.

SKAdNetwork is a framework introduced in 2018 and updated to v.2 which reduces access to the IDFA. According to Apple, “The ad network API helps advertisers measure the success of ad campaigns while maintaining user privacy.” Based on the framework, attribution and analytics platforms build their solutions. The SKAdNetwork attribution window, according to App Store Connect Engineer feedback “From the time of app install to first launch (and registering the install), can  take 60-days.”

AppsFlyer has presented its solution and described the implementation of SKAdNetwork and AppsFlyer attribution. The solution is based on the allowed SKAdNetwork methods and signal. It means that user-level details on the campaign level are available only if the user has provided AppTrackingTransparency (ATT) permission.

Clicks and impressions on the user-level will not be available to anyone.

Read more details on the solution and new dashboard.

Adjust iOS 14 – thoughts about the future

Spoiler: Adjust does not believe that everything will be demolished and that the App Store ecosystem may go down. At the same time, Adjust has announced that they are working on a solution and will release it in September 2020. I guess if you are an Adjust customer, don’t worry about that. Just relax and wait for the upcoming solution.

You may also read some articles written by CTO and Co-founder of Adjust:

As the leading competitor, Branch is also working on its solution. The blog post was published on August 14 and contained some solution details.

There are many scandals on data privacy and how Facebook handles it, but what we know is that Facebook’s targeting algorithms are great for acquiring high-value users. Since  Apple’s iOS 14 changes announcement, there’s not enough information from Facebook nor any thoughts on how it impacts their business. However,  a couple of days after WWDC Facebook published a blog post, The Value of Personalized Ads to a Thriving App Ecosystem, `where it shared internal test results – advertisers lose 50% revenue without personalized targeting and optimization.

According to CNBC Facebook CFO David Wehner said that the upcoming changes to Apple’s iOS 14 could hurt the social network’s ability to target ads to users.

Well, hopefully, Facebook and Apple will be able to find a solution. If not, publishers will notice the changes immediately after the iOS 14 will be released.

Amplitude claims there will be no impact. Here you can see the FAQ from Amplitude with the most common questions.

Yesterday, we covered new StoreKit 2 features that were announced on this year’s WWDC. Today, we’re going to discussing the...

How to Enroll for the New App Store Small Business Program

Apple has announced the new App Store Small Business Program in November. The program allows reducing the Apple commission on... 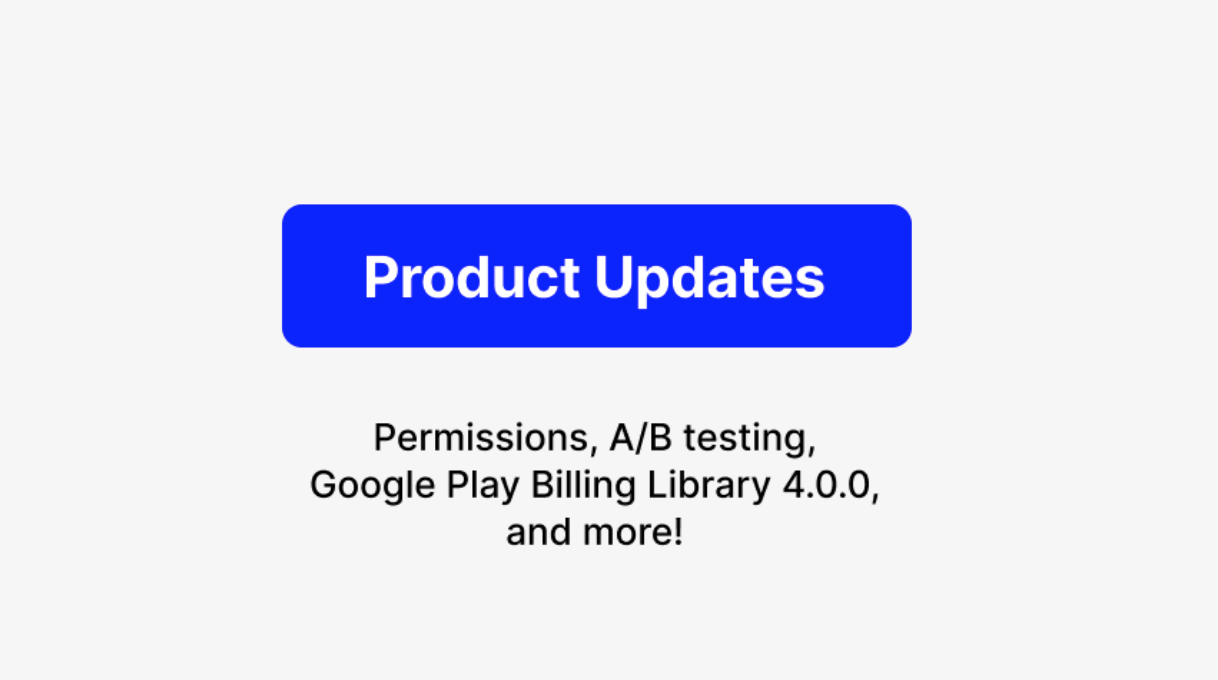 We know you have huge plans for the second half of the year - so we think this is the right moment to share with you our latest updates you might find useful. Read this blog post to learn more about Permissions, A/B testing, Google Billing 4.0.0 support, and more.